Tactical Gear For The Security Industry 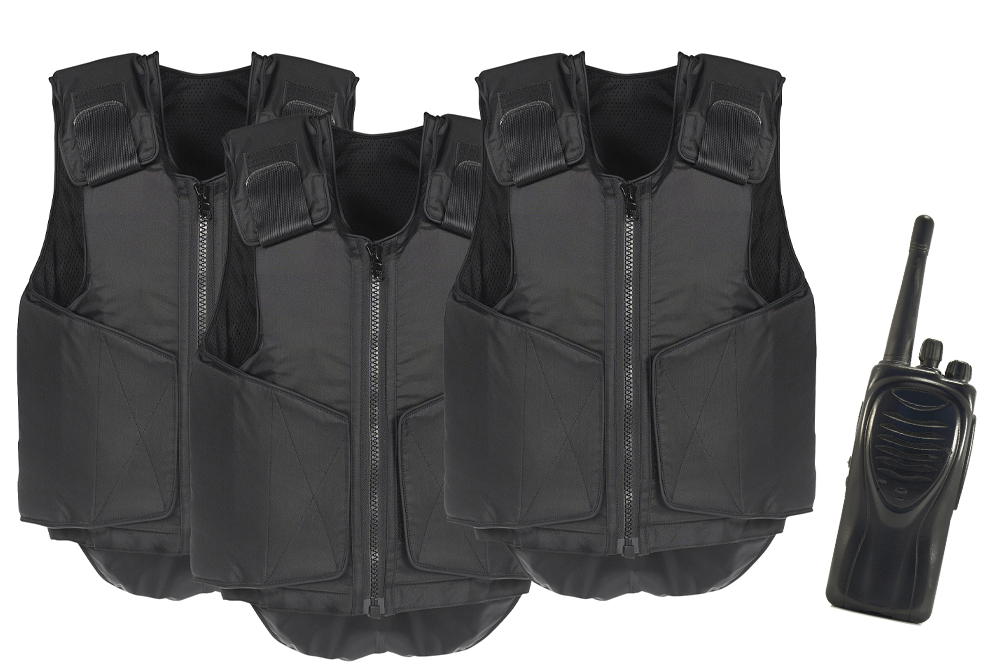 Security companies in South Africa are responsible for safeguarding large facilities such as residential housing complexes and retail shopping centers. This requires security company employees be both well trained and well equipped. The Tactical Defence Store carries gear such as bulletproof vests, security belts, pepper spray, tazers and two-way radios that allow security personnel to do their job safely and effectively.

Body Armor
Ballistic protection, commonly referred to as a bulletproof vest, is often at the heart of any self-defence system. Ballistic protection provides defence from bullets, however, the exact types of bullets body amour is capable of stopping depends on its rating. Ballistic body armor must be chosen based on the level of threat that is most commonly encountered. Most bulletproof vests are constructed from soft materials, such as Kevlar, that can stop slower moving bullets like those fired from 9mm, .357 magnum and .44 magnum handguns. This type of body amour is referred to as “soft” amour. Hard body amour is constructed of a series of plates and can stop more powerful, faster moving bullets. Some of the most advanced technologies, such as those used by the military, are capable of stopping some rifle rounds.

Security Belts
Tactical duty belts, sometimes called a utility belt, is typically constructed from leather or nylon. The belts are designed to carry any number of items from sidearms and pepper spray to handcuffs and two-way radios. These belts allow security personnel to have all the needed tactical gear at their immediate disposal while freeing up their hands. Pouches can also be added to the belt for a more customized organization of equipment as a security company or employee needs.

Holsters
Security personnel need tactical duty holsters that are versatile and well designed. They must be comfortable enough to be worn for long hours, reliable enough to meet challenges and sturdy enough to hold up to hard use. Because comfort is often a key issue, holsters made of fabric are often a better choice than leather. While it will keep the weapon at the ready while on foot patrol, a belt holster can make the weapon hard to reach while driving. Depending on specific operational needs and individual taste, there are magnetic holders that attach to the dash or console in a vehicle to keep a weapon handy while on patrol.

Pepper Spray
Pepper spray is a great choice for security personnel as it is a highly effective, but non-lethal, form of self defense available in a wide variety of sizes and strengths. The potency of pepper spray is determined by the percentage of capsaicin in the spray, the active ingredient in hot peppers that causes a burning sensation. Capsaicin content in pepper spray begins at .01 percent and increases in severity and effectiveness with the highest concentrations being over 65 times hotter than regular hot sauce. Pepper spray is available in various size canisters and delivery methods that are as small as a tube of lipstick up to the size of small fire extinguishers. Pistol-like devices can accurately deliver a charge of pepper spray over 40 feet.

Tazers
Tazers are a popular weapon for security firms as these units deliver an immobilizing, but nonlethal, shock to an attacker. While “TASER” is actually a brand name of a stun gun, just as Vaseline is a brand of petroleum jelly, in common use the term tazer, spelled with a “z,” describes a handheld unit that shoots a probe attached to the hand unit by electrical wires. The higher the voltage of the tazer the greater the shock it will deliver, and the faster it will incapacitate a perpetrator. This type of shock is typically safe as it employs a high voltage, but very low amperage, charge.

Radios
Two-way radios were originally named “walkie talkies” due to the radios being portable. These radios typically have only one or two watts of power and cover a range of a few miles under ideal conditions. However, base units offer 50 watts of power and can send and receive signals to hand held devices for up to 25 miles. This makes these radios an ideal form of communication for the security industry as the devices are not dependent on a cell tower to function.

The Tactical Defence Store can supply a full line of tactical gear from handcuffs to a bulletproof vest for the security industry. They can can courier any size order anywhere in South Africa and their trained and knowledgeable staff is available to answer any questions.